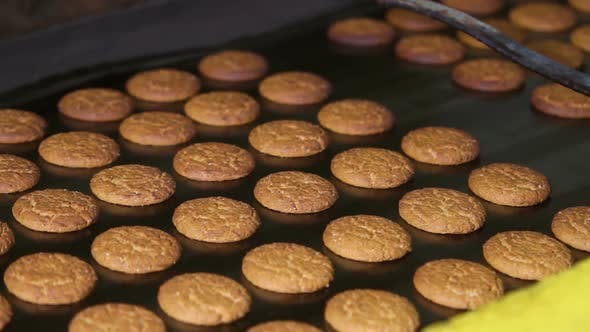 If you’re wondering how finger biscuits are made, you’ve come to the right place. This article will explain the process of making these tasty treats, including the Baking oven and a fully automatic stick cracker making machine. You’ll also learn more about Central Control Systems, which are key components of this type of manufacturing process. Then, you’ll be ready to purchase your own Finger biscuit making machine.

A full automatic stick cracker making machine is an advanced machine that has several important functions. It can produce a variety of biscuits, including hard and soft stick crackers, sandwich and core filling biscuits, and wire-cut and deposited cookies. The machine has all working processes completed automatically in a single line. It can be customized to produce various shapes and sizes. You can choose from electricity, gas, or LPG as the power source.

This fully automatic prawn cracker production line comprises a mixing drum, an extruder, and a slicer. The whole production line is equipped with an automatic temperature controller. The machine incorporates a hopper where shrimp powder is placed. The machine then pushes the shrimp pulp through a wringer with hot water. The mold then shapes the dough into cylindrical sticks. After shaping, the slicer cuts them into thin slices. Then, the prawn crackers are packaged.

A Ladyfinger making machine is a device which makes ladyfingers. Ladyfingers are cookies that are shaped like a lady’s finger. They are usually around 3 inches long and an inch wide. They should be dusted with powdered sugar before baking. Once the ladyfingers are baked, they should be transferred to a wire rack to cool. To make a batch of ladyfingers, the machine should be used immediately after you have finished mixing the ingredients.

To prepare ladyfingers, separate the egg whites and yolks. If you are using a planetary mixer, increase the yolk volume to four times. Then, test the mixture by dipping a spatula in it. It should stick to the spatula. If the yolk drips, it’s too wet. Then, place the egg whites in a separate bowl of the planetary mixer and whisk them on low speed until they are stiff and firm.

The production of finger biscuits requires a baking oven that is highly efficient and enables consistent product quality. In a factory baking oven, the temperature and humidity of the product are regulated. The temperature of the biscuits is kept under a specific range, and the aerating chemicals used in the dough formulation are adjusted to ensure an even colouration. The temperature and humidity are also monitored at the front of the oven, where the top heat is usually set.

Most biscuits now are baked in travelling and band ovens. These ovens have multiple independently controlled zones where the temperature and time can be changed quickly. The biscuits are baked at different temperatures, ranging from 2.5 to 15 minutes. However, a static baking oven cannot be controlled to change its temperature quickly, and the results are very different. The baking time depends on the thickness of the biscuits. A thin cracker, on the other hand, can be baked at higher temperatures.

In order to achieve uniformity in biscuit production, the entire production process must be monitored and controlled. In this regard, the researchers have designed a HACCP plan for a finger biscuit plant. It incorporates the plant’s processing conditions and the specifics of the product. The system comprises recordkeeping forms like a product description and its ingredients, process flow diagram, hazard identification, critical control point determination, and control chart.

After the biscuits are finished in the oven, they are transported to cooling conveyors. These cooling conveyors are generally of fabric construction and run slightly faster than the oven band. These conveyors protect the biscuits from moisture and dust. The conveyors can run in several tiers. There are different packaging machines for different types of biscuits. There may also be radial bends and various turnover devices. The biscuits are transported to the packaging area during the cooling process.

Traditionally, the ladyfinger cookie was made by hand and was popular in England. This unique shape of the cookie was the inspiration for the name. The cookie dates back to the 11th century in France, and it is known as Savoiardi in Italy, which means “from Savoy”. As the name suggests, the first ladyfinger biscuit production plant was operated by the House of Savoy. Today, a ladyfinger biscuit production line is an efficient way to make these delightful cookies.

The traditional recipe of ladyfingers uses no chemical leavening agent, relying instead on the air in the eggs. Ammonium bicarbonate is sometimes used to add a little more leavening to the recipe, but this is not common. The mixture of egg yolks and sugar is beaten separately and folded with flour, giving a light, fluffy texture. The finished product is rolled in powdered sugar and baked. Then, it is cooled on a rack to cool. It can be stored at room temperature for 3 days, or frozen for up to a month.